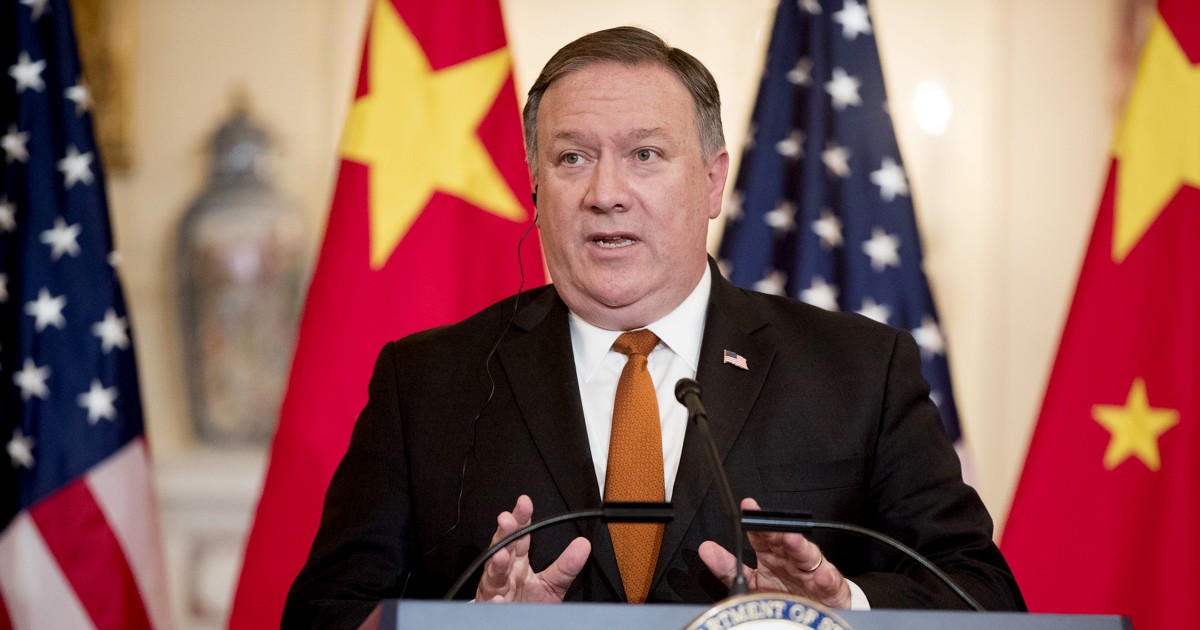 Mike Pompeo cast doubt on the credibility of the recent WHO-China investigation into the origins of COVID-19 ahead of its expected report release as the former secretary of state defended the declassified intelligence that seemingly points toward the Wuhan Institute of Virology.

Officials from both the Trump and Biden administrations have said that the Chinese government worked to thwart investigations into the origins of the virus, which has killed 2.69 million worldwide, and the WHO-China report is slated to be released next week. Both administrations said China was not transparent and is still concealing key data. Congressional reports have blamed China’s duplicity and the World Health Organization’s incompetence for an outbreak becoming a pandemic.

“It is absolutely imperative when this report comes out we understand the basis for the data, because I fear that in the end, this report will not be remotely reflective of what actually transpired, because I don’t believe these investigators had either the capacity or the access necessary to actually conduct a thorough investigation of how this Wuhan virus ultimately commenced,” Pompeo said in an interview with the Washington Examiner.

A State Department fact sheet released in mid-January contended that Wuhan lab researchers “conducted experiments involving RaTG13, the bat coronavirus identified by the WIV in January 2020 as its closest sample to SARS-CoV-2 (96.2% similar)” and that the lab “has a published record of conducting ‘gain-of-function’ research to engineer chimeric viruses.” The fact sheet added that the lab “has engaged in classified research, including laboratory animal experiments, on behalf of the Chinese military.”

“It will be absolutely critical that we get access to the people who conducted the investigation and ask them a series of questions. Tell me what limits were placed on who could be selected. Tell me how the individuals were chosen,” Pompeo said. “Were there conflicts checks that were run? When you began to negotiate for the scope of what you could investigate, how much breadth were you given, and what were the things that the Chinese Communist Party was particularly opposed to you reviewing? Did you get access to the scientists who were in that laboratory in 2019 and the early part of 2020 — did you get to speak to them in a situation where they could speak freely? Did you get access to real data, original data, not hand-me-down, second-order information?”

The former secretary of state said that the declassified fact sheet effort was led by the State Department with input from the intelligence community.

“The U.S. government has reason to believe that several researchers inside the WIV became sick in autumn 2019, before the first identified case of the outbreak, with symptoms consistent with both COVID-19 and common seasonal illnesses,” the State Department fact sheet said, arguing that “this raises questions about the credibility of WIV senior researcher Shi Zhengli’s public claim that there was ‘zero infection’ among the WIV’s staff and students of SARS-CoV-2 or SARS-related viruses.”

Pompeo argued: “We made sure that everyone throughout the United States government’s national security apparatus understood what we were doing, our motivation for doing this — we wanted to share what we believed was important information about the origination of the virus and the risks of what was taking place at the Wuhan Institute of Virology.”

He continued: “There’s so much that we still don’t know, but every fact that I have seen would be consistent with a release from that WIV. You’ll remember, if you go back to the beginning, people were throwing around language that said, ‘Well, this had to have been natural, it couldn’t have been manmade’ — it’s not really the right way to think about this problem set.”

“It is very clear that the Wuhan virus could well have been something that was being worked on, the gain-of-function of activities, this work that was being done inside of this WIV, that the State Department had real concerns about for an extensive period of time, that its biosafety measures were inadequate,” Pompeo said. “That combination of three things: the fact that it is possible they were working on a virus similar to the one that we now are suffering from, second, that inadequate biosafety measures at the facility, and then third, the massive, intentional cover-up coming from the most senior levels of the Chinese Communist Party.”

He added: “I hope that when we see this report next week, we get answers to these questions, but I am skeptical that the Chinese Communist Party will ever permit anyone to really understand what happened there. I think that suggests that the alternative hypotheses about wet markets and the like are much less likely than the world originally believed.”

U.S. Embassy officials in China raised concerns in 2018 about biosecurity at the Wuhan lab led by “bat woman” Shi Zhengli.

Pompeo said that biosecurity was “a long-standing challenge that we knew about, not just, frankly, at the Wuhan Institute of Virology, but more broadly with respect to what we knew about the broad scope of the bio-activities that were taking place inside of China.” He argued that Chinese research labs “did not meet the global standard, and yet the Chinese Communist Party continued those activities inside of their country — and this is not the first time that there have been concerns that viruses have escaped from China.”

Peter Daszak, the only American on the WHO-China joint study, leads the EcoHealth Alliance, which steered at least $ 600,000 in National Institutes of Health funding to the Wuhan lab for bat coronavirus research over the years. Daszak called the lab’s decision to take down a public database containing thousands of viral samples “absolutely reasonable” earlier this month and said it was the fault of “anti-China political rhetoric” in the U.S. that resulted in the Chinese Communist Party blocking an investigation for a year.

He previously criticized the Biden administration for appearing skeptical of the WHO’s preliminary findings in February and defended China to CCP-linked outlets.

“I always found it odd that the only U.S. representative was someone who had been involved in the programs there and might well have the work that they did there, whatever that may have been, called into question as a result of what might be found during the course of the investigation,” Pompeo said. “It’s an odd thing to send someone in to investigate the work that they were previously engaged in — or at least, if not engaged in, connected to.”

Pompeo said that early on in the pandemic, senior officials from the Centers for Disease Control and Prevention, along with the Department of Health and Human Services, “were trying to get original virus samples,” but “it appears that those were destroyed — if that’s true, we will never get them.” The former secretary of state said he was also “confident that there were researchers that were engaged in activity that they knew what they were doing was dangerous and wrong and could answer for us once and for all what really took place” not just in December 2019 and January 2020, but in the years before that, and he hoped that a whistleblower would come forward in the future.

Peter Ben Embarek, the head of the WHO group that investigated the coronavirus’s origins, said in late February that “we didn’t do an audit of any of these labs, so we don’t really have hard facts or detailed data on the work done” at the Wuhan lab.

Read More:  The Sordid Union Between Intelligence and Organized Crime

Pompeo said the U.S. was confident COVID-19 had begun in China — and specifically in Wuhan.

“I don’t recall a single voice inside the State Department ever doubting either of those two facts — and you should know it is a rambunctious institution with lots of different voices that all are often heard — and on this particular issue, I don’t recall having heard a single voice that had any doubt that this originated in Wuhan, China,” he said.

CLICK HERE TO READ MORE FROM THE WASHINGTON EXAMINER

Antony Blinken, Biden’s secretary of state, and Jake Sullivan, the president’s national security adviser, have criticized China for blocking data on the origins of COVID-19, though Sullivan has specifically declined to stand by the declassified U.S. intelligence.

“I want to give them time to settle into the fact set,” Pompeo said of the Biden administration. “I think when they do, I think when they see the same facts that we saw, it’s very difficult to imagine them coming to a different conclusion about what happened. They may make different policy choices and the like, but they will come to the same conclusions that we did. The facts are inescapable.”

Pompeo did criticize the Biden administration’s decision to rejoin the WHO.

“At the point of maximum impact, the moment that the WHO’s pandemic prevention efforts were most critical, that they had to be the most right as quickly as they could, they allowed the Chinese Communist Party to walk all over them and denied the world the access to the information that it needed in a timely fashion that could well have saved lives all across the world,” he said. “And for that, the leadership at the WHO has to be held accountable.”

The Chinese government denies that the coronavirus originated in the Wuhan lab and has cast doubt on the idea that it originated in China, including using Chinese diplomats to push conspiracy theories that it started with the U.S. military.