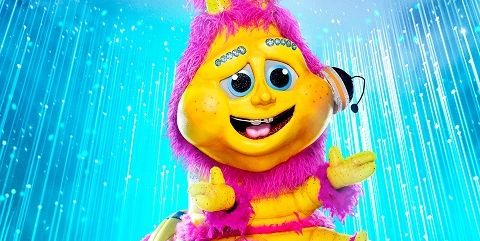 OK Taylor Swift fans, gather round, ’cause one of us is on The Masked Singer this season.

The Caterpillar is a new contestant making their debut tonight on Fox, but a clue for whomever chose to don a bug costume on national television has dropped! Sure, knowing the person under the mask is a Swiftie fan might only narrow options down to about half the planet, but you best believe I’ll be out here trying to figure out who it is until I’m 100 percent sure.

Now, I’ll be the first one to say it…the Caterpillar costume is a little creepy. Like, it’s definitely something you’d see in a terrifying fever dream. But that doesn’t mean whoever’s underneath won’t be a pleasant surprise, so here’s what we’ve got to work with so far about who Caterpillar is on The Masked Singer.

The first thing we know about the Caterpillar is the unnervingly smiley costume itself. It’s a fuzzy yellow and pink getup with three sets of feet. The head part has a toothy grin with braces and is wearing a headset. It all seems random, but I’m sure at some point it’ll start to make sense.

The Caterpillar won’t actually grace the stage until tonight when they sing “If I Were a Boy” by Beyoncé, but the show has still given one tiny clue about who is underneath it all. In a short clip, the fuzzy bug said “You might not know who I am yet, but I can say a Taylor would. Especially this one,” followed by a picture of Taylor Swift popping up. Verrrry interesting.

Brendan was featured in Taytay’s song “ME!,“ so that has some people thinking he’s under the costume purely based on association and the general ~vibes~ from the music video fitting the color scheme of the costume. It’s not impossible, I’ll give it that!

Another friend of T. Swift who’s also a singer (and potential Caterpillar) is Todrick Hall. In case you don’t remember, he was in Taylor’s “Look What You Made Me Do” and “You Need to Calm Down” videos (and even co-exec produced the latter). He also just released his fourth album this past summer, so this could be some good promo for him.

Alright yes, this one seems like a stretch, but some people are truly under the impression that Law and Order: SVU star Mariska Hargitay is moonlighting as a giant caterpillar. She was in Taylor’s “Bad Blood” music video AND Taylor named one of her cats after Mariska’s SVU character Olivia Benson. There is one teeny tiny problem with this theory though: Mariska has no known history of being singer (although TBH, that’s never stopped past Masked Singer contestants before, so who knows)!

Want more clues? Tune in and catch the Caterpillar perform on The Masked Singer tonight at 8 p.m. on Fox.

This content is created and maintained by a third party, and imported onto this page to help users provide their email addresses. You may be able to find more information about this and similar content at piano.io

Read More:  Patient speaks after surgery: 'The whole system is in crisis'