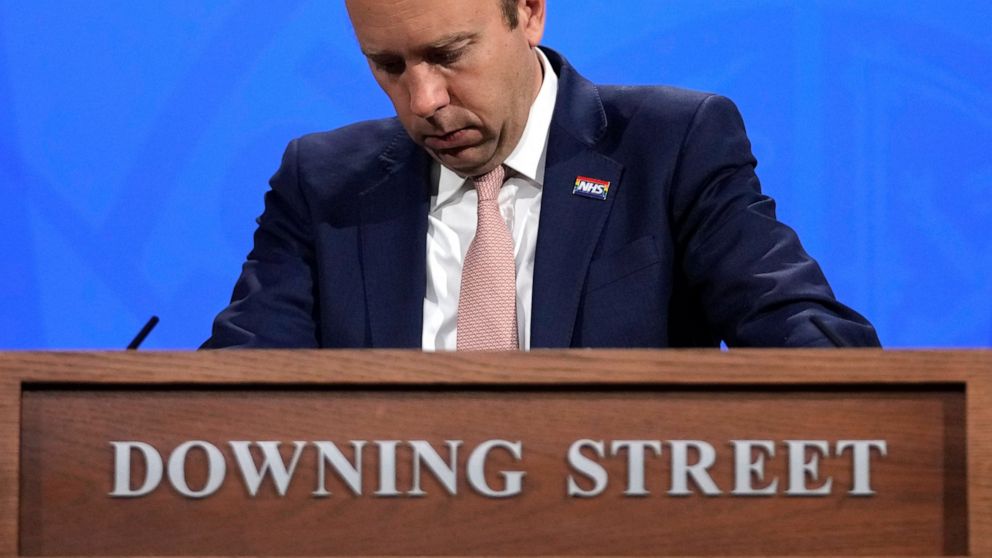 U.K. Health Secretary Matt Hancock has resigned a day after apologizing for breaching social distancing rules with an aide with whom he was allegedly having an affair

LONDON — U.K. Health Secretary Matt Hancock resigned Saturday, a day after apologizing for breaching social distancing rules with an aide with whom he was allegedly having an affair.

The tabloid Sun newspaper had run images showing Hancock, who is married, and senior aide Gina Coladangelo kissing in an office at the Department of Health. The Sun said the closed circuit television images were taken May 6 — 11 days before lockdown rules were eased to allow hugs and other physical contact with people outside one’s own household.

In a resignation letter to Prime Minister Boris Johnson, Hancock said the government owed “it to people who have sacrificed so much in this pandemic to be honest when we have let them down.”

Johnson said he was “sorry” to receive Hancock’s resignation and that he “should leave office very proud of what you have achieved — not just in tackling the pandemic, but even before COVID-19 struck us.”

Johnson had been facing widespread calls to fire Hancock, who has led the country’s response to the pandemic.

The Sun late Friday also published a video of the embrace, which had prompted the main opposition Labour Party to deem his position “hopelessly untenable.” Some Conservative lawmakers had also called on Hancock to quit because he wasn’t practicing what he has been preaching during the pandemic.

Read More:  Patient speaks after surgery: 'The whole system is in crisis'

“The last thing I would want is for my private life to distract attention from the single-minded focus that is leading us out of this crisis,” Hancock said in his letter of resignation.

“I want to reiterate my apology for breaking the guidance, and apologize to my family and loved ones for putting them through this,” he said. “I also need (to) be with my children at this time.”

Hancock is the latest in a string of British officials to be accused of breaching restrictions they imposed on the rest of the population to curb the spread of the coronavirus.

The government is also facing questions about the circumstances in which Hancock hired Coladangelo, a university friend who was appointed to his department last year. She was initially employed as an unpaid adviser and this year became a non-executive director at the Department of Health, a role that pays about 15,000 pounds ($ 21,000) a year.

Johnson’s Conservative government has been branded a “chumocracy” by critics for hiring special advisers and contractors from outside the civil service without long-customary levels of scrutiny.

Hancock’s department has been accused of waiving procurement rules to award lucrative contracts for protective equipment and other medical essentials, often to personal contacts. Hancock has said he was driven by the need to secure essential supplies quickly at the height of the outbreak.

Hancock has faced weeks of pressure since the prime minister’s former top aide, Dominic Cummings, accused him of botching the government’s response to the pandemic. Cummings, now a bitter critic of the government he once served, told lawmakers last month that Hancock “should have been fired” for alleged lies and errors. He also published a WhatsApp message in which Johnson branded Hancock “totally (expletive) hopeless.”

Cummings himself was accused of breaking the rules and undermining the government’s “stay home” message when he drove 250 miles (400 kilometers) across England to his parents’ home during the spring 2020 lockdown. Johnson resisted pressure to fire him, but Cummings left his job in November amid a power struggle in the prime minister’s office.